Scientists at Oslo University Hospital have developed an immunotoxin, MOC31PE, comprising a full-length murine antibody against the epithelial surface antigen EpCAM, which is frequently overexpressed in many cancer forms, coupled to Pseudomonas exotoxin A (PE). Under the generally recognized (classical) immunotoxin mechanism, the antibody and toxin components provide targeting and effector (killing) functions respectively.

MOC31PE has successfully completed phase 1 studies in patients, with a good safety profile and highly promising efficacy data for colorectal cancer (CRC) patients, a patient group with a high unmet need. Patients were treated intravenously (IV) with MOC31PE alone or in combination with the immune-suppressor Cyclosporin A (CsA), once every 2 weeks up to 4 times. MOC31PE was well tolerated, with only a rapidly reversible liver toxicity (transient increase in liver enzymes) as the dose-limiting toxicity. The Kaplan-Meier survival plot shows that CRC-patients treated with MOC31PE alone had a median OS of 16.3 months compared to 6.0 months for CRC-patients in the combination group (Figure). Significantly, overall survival in the combination group was closely similar to historical data for placebo, indicating that adding an immune-suppressor abolished activity. Current state-of-the-art treatments for this patient group are regorafenib (brand name Stivarga) and Lonsurf, who only extend overall survival (OS) by 1-2 months beyond the median 5 months seen with placebo, at high cost and toxicity. Clinical data for MOC31PE-treated patients indicate dramatically increased survival (16 months vs 6-7 months) and superior safety profile of our drug relative to the abovementioned state-of-the-art treatment options for late-stage CRC patients. 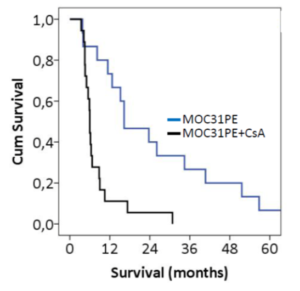 Analysis of patient samples from the phase 1 study as well as in vitro/ex vivo data indicate a mechanism of action of MOC31PE involving stimulation of the immune system through induction of immunogenic cell death. This new understanding points to a different clinical implementation of MOC31PE than previously considered the optimal. In particular, it suggests combination therapy with checkpoint inhibitors as a particularly attractive clinical implementation of the therapeutic candidate.

Inven2 has an exclusive license to the commercial use of the antibody-component of the immunotoxin. In addition, we have filed a method of use patent application to cover the novel potential uses suggested by the surprising immune-stimulatory effect observed from the clinical trials. The application (WO 2019/020648) is in national prosecution in US and CN.

We are looking for licensees of the product. 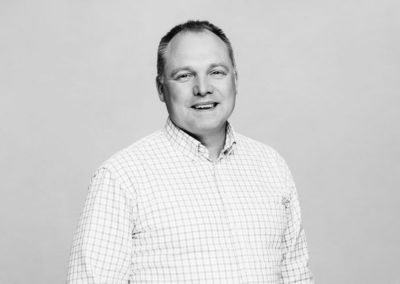