The Dutch company SJJ Solutions, in collaboration with Oslo University Hospital and the University of Oslo, is developing a ground-breaking syringe. The syringe is specially designed to inject medicine into the eye – a concept that is not currently available.

The Department of Ophthalmology at Oslo University Hospital, situated in block 36 at Ullevål Hospital, is the biggest in Norway. The department is clearly bursting with activity, with full waiting rooms and busy doctors and nurses.

Ophthalmologist and professor Morten C. Moe, whose office is on the fifth floor, confirms this by arriving half an hour late and then being paged shortly afterwards. Both incidents were due to patients needing extra assistance from the experienced ophthalmologist.

Along with his colleagues Magne Sand Sivertsen and Øystein Karlsnes Jørstad and the research group led by Jan Terje Andersen at Oslo University Hospital and the University of Oslo, Moe has already developed a method for storing ready-to-use syringes containing medicine used in eye treatments.

However, a syringe specially-adapted for use in the eye is not currently available. Most syringes used for this purpose contain a thin coating of silicone oil used as a lubricant. The silicone oil droplets from the syringes can remain in the eyes, and the patients see them as floaters in their vision.

– In an industry collaboration with the Dutch company SJJ Solutions, we have developed a specially-designed syringe for use in eye treatments, says Moe.

Before taking a closer look at this industry collaboration, we need to go into its history. 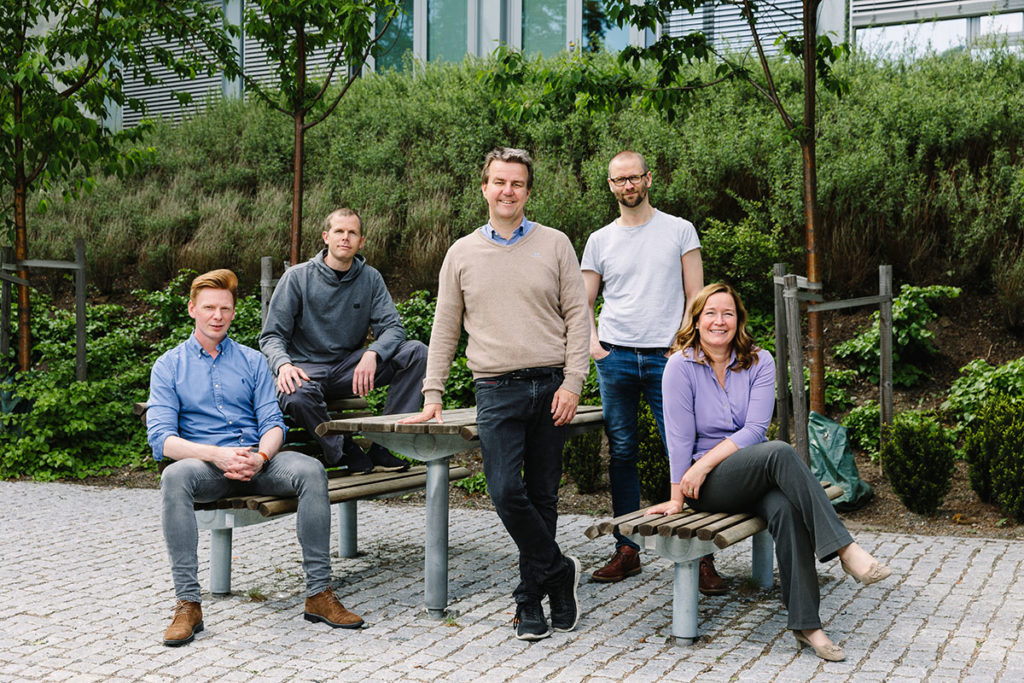 From blindness to treatment

The world’s population is getting older, and the elderly are prone to illness. One of the most common eye conditions that affects the elderly is age-related macula degeneration (AMD).

– Elderly persons with AMD have problems reading and recognising faces because their vision is blurred, and it can sometimes take the form of wavy patterns in the middle of their vision, explains Moe.

In 2005, American researchers demonstrated that the most aggressive form of the condition, wet AMD, can be kept in check by injecting a medicine containing a VEGF inhibitor into the eye. The medicine, called Avastin, prevents the formation of new blood vessels. It was developed for use in cancer treatment.

In 2006, ophthalmologists at Ullevål Hospital started to treat wet AMD with Avastin, and they have later demonstrated through research that this is both effective and safe. Since then, two other VEGF inhibitors have been developed especially for eye treatments.

Wet AMD is a chronic disease and many of the patients are given injections directly into the eye as often as every four to eight weeks over the course of many years.

In 2019, we injected nearly 30,000 people with anti-VEGF inhibitors. The advantages it poses for the approx. 3,000 patients who annually undergo treatment for wet AMD is huge. They retain their sight and it means great savings for society, as the patients remain able-bodied, says Moe.

– The treatment is also used for other eye diseases, such as retinal vein occlusions, in which blood clots block the vein, and eye complications due to diabetes, says Moe.

Despite all the positive aspects of the new treatment, the increased pressure on the staff at the Department of Ophthalmology is huge as one patient group almost overnight had to be followed up closely, at the same time as costs for medication sky-rocketed.

– We understood that we had to do something, says Moe.

What Moe is referring to is a service innovation project in which he and his colleagues in the department have teamed up with researchers in Jan Terje Andersen’s group and the hospital pharmacy at Ullevål Hospital.

Read more about the project in this article from Dagens Medisin from February 2018 (in Norwegian only).

In the spring of 2018, the staff at the Department of Ophthalmology at Ullevål Hospital realised that a few patients being treated for wet AMD had residual silicone oil, small silicone droplets, in their eyes. The patients experienced these as specks that were constantly in their field of vision.

– We understood that the silicone came from the injections. – The syringes are lubricated with silicone oil in order to glide better during use, Moe explains.

This became the start of an industry partnership with the Dutch company SJJ Solutions.

– When SJJ Solutions contacted us about whether Jan Terje’s group and we would be interested in establishing an industry partnership to develop a specially-adapted and tailored syringe for eye injections, there was no turning back, says Moe.

In an email from the Netherlands, Jasper Schootstra, who heads SJJ Solutions, writes that the collaboration with Moe and his colleagues at the Department of Ophthalmology and Jan Terje Andersen’s laboratory means a lot for the company.

– Our shared goal is to set a new standard for injections and treatments carried out directly into the eye. We complement each other very well: Here at SJJ Solutions we have little clinical experience, while Moe and his team have little experience of developing medical equipment. We have good, open and constructive conversations where we complement each other in a positive manner and share skills and knowledge. Andersen and his group’s expertise in the analysis of proteins and antibodies can document the syringe we are developing using first-class tests and analyses, says Schootstra.

Schootstra, Moe and Andersen, along with other colleagues, meet in Oslo every three months to ensure progress in the work.

– The syringe prototype has been developed. It’s just the way we wanted it, with a thin needle and room to contain the exact dosage the patients with wet AMD need. And it is completely free of silicone coating, says Moe.

Andersen and his research colleagues are now working on testing the syringe’s properties for storage and shelf life with and without anti-VEGF inhibitors. The tests are carried out continually. The syringe will be taken into use once it has been documented as safe and effective.

The market potential for such a silicone-free syringe tailor-made for eye treatments is huge.

– Around twenty million people in the world currently suffer from wet AMD, and in 2040, this number will be around 28 million. The patients who receive treatment with anti-VEGF inhibitors need an average of 8–10 injections every year, which constitutes a huge number of injections, says Schootstra.

– The focus has been on developing a syringe to treat wet AMD, but we see that the potential is even greater, says Moe.

Business Developer Kristin Sandereid and Project Manager Jan Solberg at Inven2 have assisted Moe and Andersen in drawing up an agreement with SJJ Solutions. They have also provided advice about patenting.

The agreement with SJJ Solutions will give the ophthalmologists and researchers milestone payments when the syringe is rolled out in the global market. The collaboration will also provide income to long-term research and development of other projects. So far, the industry agreement comprises Europe and the United States.

– The Department of Ophthalmology has been involved in several service innovation processes concerning treatment of wet AMD, but this is the first time it has led to an industry collaboration. It is an exciting journey, which has given us a taste for more, says Moe and continues:

– Normally, our clinicians only focus on patient treatment. My colleagues and I have, literally, opened our eyes to how rewarding it is to develop innovative solutions that can make treatments for patients better and more efficient. Industry collaboration can lead to more innovation and make new solutions available for even more patients, says Moe.

The Department of Ophthalmology at Oslo University Hospital

The Department of Ophthalmology at Oslo University Hospital is Norway’s biggest and has special expertise in all treatments of eye diseases, including all national treatment services in ophthalmology.

The department focuses on clinical research with a large patient base and highly specialised expertise, in addition to translational research and clinical laboratory research at the Centre for Eye Research.

SJJ Solutions is a Dutch company established in 2018 by three brothers. Their focus is on innovation and development of medical equipment.

The company has developed the Zero Residual™ Concept, which is a first generation syringe tailor-made to inject very small amounts of medicine, specifically between 0.05 and 0.2 millilitres. The new syringe being developed by the company and the Norwegian researchers and clinicians is a second generation syringe, with even better adaptations for eye treatments.

The syringes developed by the company are tailor-made to safely provide a precise dosage with full control.

The Laboratory of Adoptive Immunity and Homeostasis

Jan Terje Andersen is a professor in biomedical innovation who leads a research group of 15 researchers known as the Laboratory of Adoptive Immunity and Homeostasis. The group is part of both Oslo University Hospital and the University of Oslo.

The research group has particular expertise in protein design with a focus on, among other things, antibodies. They are involved in a host of national and international research collaborations to develop better biological pharmaceuticals targeting cancer, chronic diseases and infectious diseases. They have developed attractive technology platforms, such as in the collaboration described in this article.

Andersen is one of the researchers with the most innovations registered with Inven2.